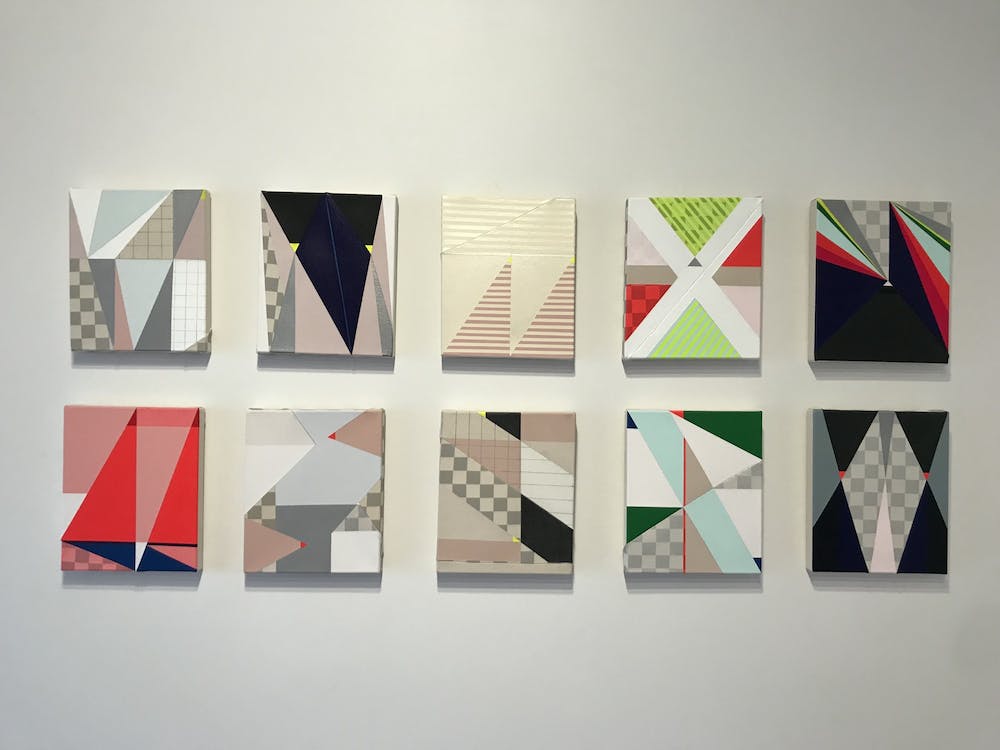 When Audrey Barcio, assistant professor of art at Ball State, was a child, she watched her grandmother paint and sat beside her, working with her own watercolors, bonding over artistic creation, growing closer as they painted and discovered new techniques.

Barcio always knew she was going to be an artist and her grandmother introduced her to the area of ​​art that interested her the most: abstraction.

“She was a self-taught and absolutely amazing painter,” Barcio said. “The reason I fell into abstraction was because as she got older she lost her sight. Instead of traditional figurative paintings…She started working very large and working in abstraction, and his work became very expressive and bold.

Now Barcio has found his own distinctive voice as an artist and commemorates his grandmother through the work of his new exhibition, “no subject (non-attachment),at Echo Arts, a contemporary art gallery in Bozeman, Montana.

Barcio said the underlying theme of the show is communication, thinking about the influences it has on everyday life, while paying homage to the artists who came before it.

“This body of paintings is the first time I have given my work a lot of personal meaning,” she said. “The canvases are sewn together. In my twenties, I had a car accident that caused me to lose several fingers from my dominant hand. I introduced sewing on these canvases as a material reference to this experience.

Barcio has 24 works on display in the exhibition, which she says is her ninth solo exhibition. The paintings vary in size and were completed within the last year. She said it was interesting to see it all come together, with each painting influenced by a different time of year.

Barcio flew to Montana for the December 10, 2021 opening and gave an artist a talk about her work. She said it’s always difficult for an artist to visualize their work in the studio in the same way it will be exhibited, so it’s important to see it at the gallery.

“Everything living together in one space is really satisfying,” she said. “It tells you so much about your work in a way that you can’t normally see.”

Barcio said he discovered the Echo Arts gallery through Sahra Beaupré, owner of the gallery. The two met in 2015 when Barcio was a graduate student at the University of Nevada in Las Vegas. Barcio and Beaupré have stayed in touch since they met and began planning the exhibit about a year ago.

“An interesting conversation I had with [Barcio] flashed through my mind and wondered what she was doing,” Beaupré said. “I read everything she had done and fell even more in love with what she was working on.”

Beaupré said she is interested in Barcio’s work because she thinks it is very in-depth and thoughtful, including modernist and abstract references, as well as references to art history.

“These three elements combined are really what initially interested me in Audrey’s paintings for the exhibition,” said Beaupré. “They are really beautiful all together.”

The community’s response to Barcio’s exposure has been positive, Beaupré said, and she believes Barcio is a ‘good guide’ for her students who can give them more advice on college and life afterwards. .

“You can always tell who a teacher is. They are very open, very receptive and very attentive, and [Barcio] achieved all the objectives,” said Beaupré. “I think she shows her students how to think about what college they’ll go to, where they’ll work… I think that’s the best kind of information to pass on to your students, beyond love that you have for the material.”

Beaupre believes Barcio can guide students in a unique way due to his own college experience, as Barcio was the first person in his family to attend a four-year university. Barcio said it was difficult for her to be a first-generation student.

She attended the Herron School of Art and Design at Indiana University-Purdue University Indianapolis (IUPUI), where she earned a degree in Art Education and a minor in Art History. She worked throughout college as a waitress, taking extra time to complete her undergraduate degree so she wouldn’t take out student loans and be able to continue paying for her education.

After graduating from IUPUI, she worked as a substitute teacher and taught classes at Herron as an adjunct teacher, as well as community classes and worked at Big Car Art Collaborative, a nonprofit arts organization in Indianapolis.

In 2008, Barcio and her husband, Phillip Barcio, moved to San Francisco, where she returned to work in a restaurant because art jobs in the area paid very low wages. She became a sommelier – a wine expert – before she and her husband moved to Los Angeles.

While in Los Angeles, a friend of Barcio’s reminded her that she had moved out West because she planned to go to college.

“He was like, ‘You’re an artist – what do you do?'” Barcio said. “And I was like, ‘I don’t know,’ and that process of questioning got me back on my path. Graduate school was a really good time because it was my first time remembered that I had really taken the time [to focus on art].”

After completing graduate school, Barcio began working at Kavi Gupta, an art gallery in Chicago, where she met various artists, including Beverly Fishman, former head of painting at the Cranbrook Academy of Art.

“[Barcio] was basically my liaison, who was my go-to person at the gallery when things came up or if I had questions,” Fishman said. “She was 100% professional and absolutely responsible. She’s super smart and I really like her.

Fishman said she always knew Barcio was an ambitious artist, so it was only a matter of time before she left the gallery to teach. She and Barcio don’t usually talk about education when they’re together, but she can imagine it being articulate, engaging and relatable.

“She’s a strong woman, and that’s really important for young artists,” Fishman said. “To see women in positions of power and to be able to emulate that idea that you could be an artist – and you can also be a mentor and an educator – is really important.”

For Barcio, teaching and creating her own art go hand in hand, and she believes her job at Ball State was the first job she had that encouraged her to be an artist.

“A lot of times when you’re an artist, you kind of hide the fact that you’re an artist because your work really wants you to be committed to them and what they do,” Barcio said. “I’m a natural extrovert and so, for me, teaching is perfect because when I’m working in my studio, it’s just me, and it can be really lonely.”

Teaching also gives Barcio the opportunity to share his passion for art history with students, reminding them why it matters to them in their careers. She also likes that teaching gives her the opportunity to examine more of the production process, especially in painting.

Barcio said there are a lot of responsibilities in teaching, which she takes very seriously. She includes various topics in her class, comparing artists of the past to those working now and what their differences are. She also shares her own experiences with students, inspiring them to look to the next chapter in their creative lives.

“That’s why I think it took me a while to get into teaching as a profession,” she says. “I really wanted to experience what it was like to be an artist and live in different cities and have a variety of different jobs. I wanted to have my own personal success and accolades, and I didn’t want to go from undergraduate to graduate in teaching, because that’s not the life that many people have, or that my students will have.