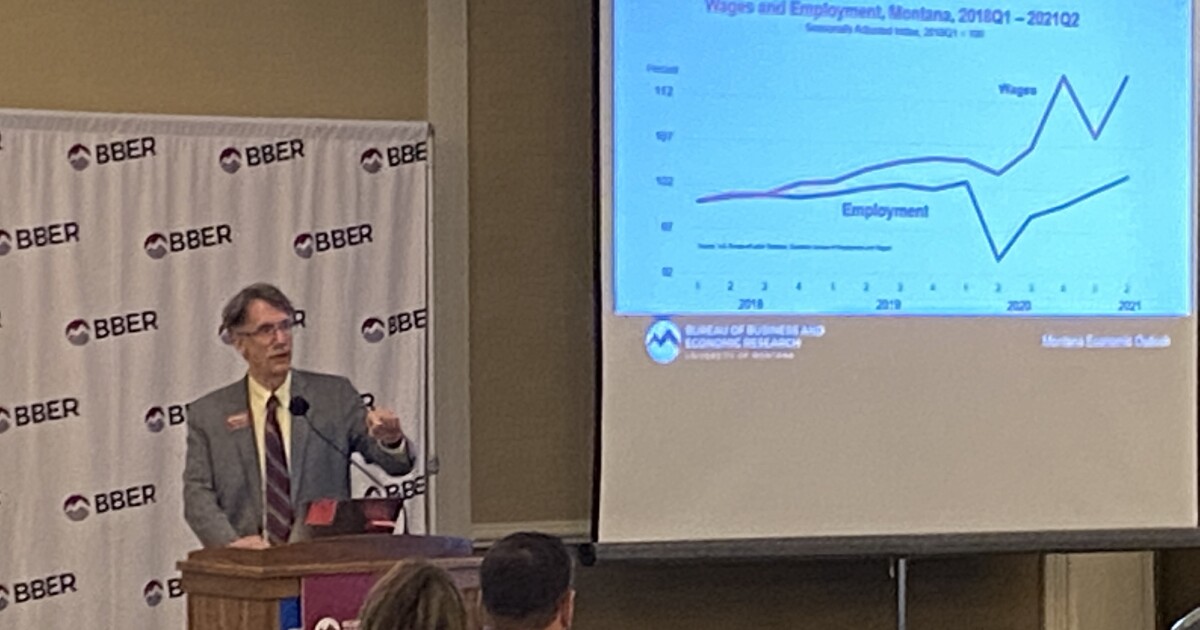 HELENA — Economists say there’s reason to expect another strong economic year in Montana, but challenges like housing and labor shortages aren’t going away.

The University of Montana’s Bureau of Business and Economic Research is hitting the road this winter for its annual Economic Outlook Seminar – sharing its latest economic data and forecast for the state. On Wednesday, analysts took the tour to the Delta Colonial hotel in Helena.

BBER Director Patrick Barkey said he expects at least two more years of above-trend growth in the state and in Lewis and Clark County. He said that for years Helena’s economy was relatively stable, but its growth started to warm up even before the pandemic.

“I’m not sure we understand all of this,” he said. “It’s the real wildcard that has shifted employment from Lewis and Clark County to the level of growth closer to Missoula, Flathead and Yellowstone.”

This growth comes with challenges, including a tight labor market. Montana’s unemployment rate has fallen to a very low 2.5%, but the overall percentage of adults actively working or looking for work is lower than it was before the pandemic. Barkey said if labor force participation returned to pre-pandemic levels, that would mean 13,000 more workers available.

One of the reasons for the low rate of participation in the labor market is that older workers do not take other jobs. Federal data shows that the participation rate for people 55 and older has declined by 5% since the pandemic.

The cost of living has also increased. Barkey said the influx of federal spending and other government programs after the pandemic should boost Helena’s economy in the short term. However, he argued that the burst of stimulus also contributed to inflation, as it led to continued demand even as economic output fell during the height of COVID.

The main topic, however, was the need for more affordable housing. This year’s seminar is entitled “Where Housing Is Headed”.

Barkey argued that the huge spike in demand over the past two years has only exacerbated existing housing problems in Montana — particularly that communities hadn’t built enough housing to meet the needs. needs.

“It has accelerated the problem to the point where even people who are not in the market – even people who already own homes, were making their payments, they are not affected by price increases – have seen the impact of the housing shortages in their locality. markets,” he said. “Why? Because their schools can’t hire teachers, because the company they work for can’t grow.

Data shows that home prices nationwide have risen about 20% in 2021. This has been significantly higher in parts of Montana, particularly Gallatin and Flathead counties.

Cathy Burwell, President and CEO of the Helena Area Chamber of Commerce, says she has seen a growing trend of people moving from the Bozeman area to Helena in search of more affordable housing. .

“We think the prices are outrageously high right now,” she said. “They’re like a Californian coming to Montana; they think it’s a hell of a deal.

An estimated 350 new single-family homes began construction in Lewis and Clark County last year. However, Burwell said they would need 450-500 just to keep up with demand.

“Builders are working as fast as they can,” she said. “They said if they start a special house, it’s sold before the foundation dries.”

Mogstad wondered if it was possible to build affordable housing in this market climate without subsidies or subsidies. She said the past two years had been difficult for their housing programs – especially after the eviction moratorium was instituted, when she said more than half of the residents at three of their properties had quit. to pay their rent.

“I think it was a good intention that got a bit out of control,” Mogstad said.

Jones, who owns a number of rental properties, echoed that concern, and he said the cost of construction and maintenance had skyrocketed. He argued that the housing problem is a “supply” problem and that subsidies will not solve it.

Harlow-Schalk said one of the biggest barriers to affordable housing projects is building the infrastructure needed to serve them. She said the influx of federal funds from the American Rescue Plan Act will help them resolve the long backlog of water and sewer projects and provide new services for the affordable housing development planned next to the Lutheran Church of Our Redeemer.

Helena was the second city to host the seminar this year, after Great Falls. They will also visit Missoula, Billings, Bozeman, Butte, Kalispell, Lewistown and Havre this winter.