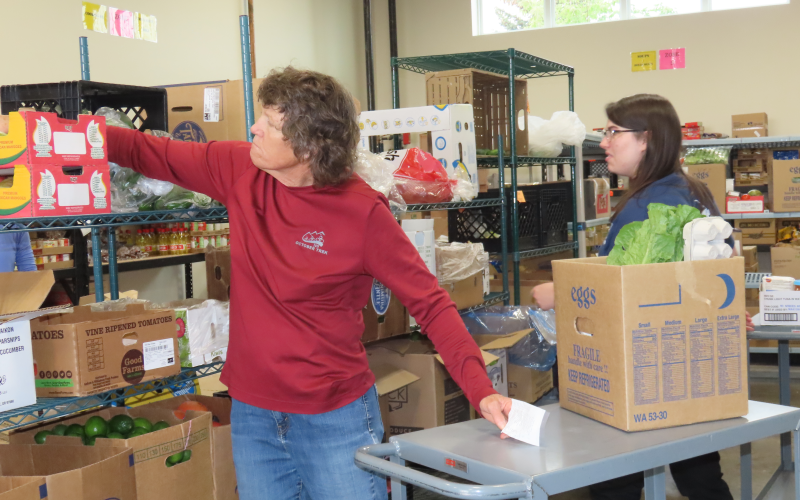 STORY AND PHOTO OF KAREN BOSSICK

“Eggs, eggs, eggs,” Julisa Vega mumbled as she scanned the paper order she held in her hand.

Normally, Vega would help a customer deposit a paycheck to Mountain West Bank.

But that day, she and her colleagues were busy filling cans of mangoes, milk, apples, pears, celery, potatoes, soup and corn on the cob for customers at The Hunger. Coalition.

Employees of the Hailey and Ketchum branches of Mountain West Bank volunteered at The Hunger Coalition in Bellevue last week as part of the bank’s 13th annual Day of Caring community service campaign.

Employees had planned to help by gleaning fruit from people’s private orchards, then organizing and distributing the gleaned fruit to Hunger Coalition customers. But the harvest has been slow to come this year, and forecast showers have prompted them to move on to filling food boxes in The Hunger Coalition’s warehouse.

“A lot is happening behind the scenes. I had no idea how fast things are moving and how much food is coming out,” said Sarah Gray, customer service manager for Mountain West Bank.


The Hunger Coalition loves having groups like Mountain West lend a hand, said Jennifer Rangel, resource coordinator for the Hunger Coalition. Earlier in the day, a group from the community school had helped clean up the greenhouses, she added.

Mountain West employees smiled as they avoided collisions in their rush to fill the boxes.

“It’s quite fun helping people,” said Gustavo Romero, “as he picked up some oranges for his box. “It’s hard at first because you don’t know where everything is, but it feels good to know you’re helping people.”


Mountain West employees help out in a variety of ways over the course of a year, including helping the Kiwanis club and registering guests for Camp Rainbow Gold’s Share Your Heart Ball.

“Anything people need help with,” Gray said. “It’s part of our philosophy, our standard as a bank: to give back to the community. »

“It’s a great way to bond with your teammates outside of work. It brings you closer and you do something good,” Vega said.

Giving back to the community has long been a priority for Ketchum native Susan “Sooz” Alfs, who was recently promoted from her role as Ketchum branch manager to vice president of the bank.


In addition to participating in the bank’s annual Day of Caring, she has volunteered at the Sun Valley Wellness Festival and helped raise funds for Wood River Valley Scholarships through the Sun Valley Brewfest. and the Labor Day Duck Race.

She is currently Secretary-Treasurer of the American Legion David Ketchum Post 115 Women’s Auxiliary.

Mountain West, founded in Coeur d’Alene in 1993, operates 22 branches, financial service centers and loan centers in Idaho and eastern Washington. It is a division of Glacier Bank, which operates 223 offices in 143 communities in Idaho, Montana, Utah, Washington, Wyoming, Colorado, Arizona and Nevada.