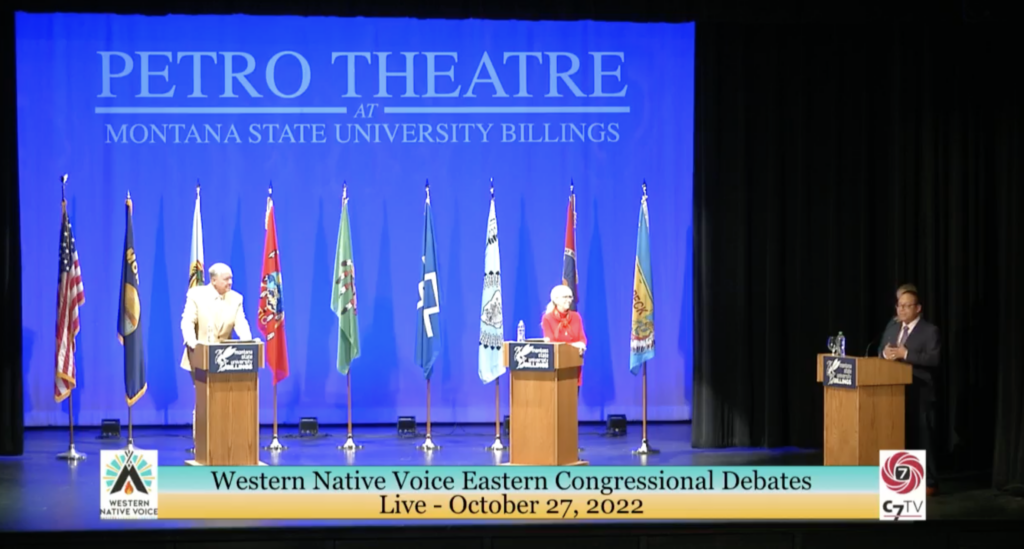 In his opening statement, Ronning gave land recognition, acknowledging that Billings was built on the homelands and unseeded villages and traditional areas of the Crow, Northern Cheyenne, Sioux and Blackfeet peoples and that this land is part of the watershed of the Elk River.

Buchanan began by commenting on the difference in debate turnout between those on stage and those who were absent.

“Penny and I accepted all the debates we were asked to do,” he said. “Our opponents are not showing up.”

Rosendale is heavily favored to win the district.

In the latest MSU-Billings survey with a margin of error of 5.3%, Rosendale leads the other candidates in the race with 35% of the vote. The poll also found he had an approval rating of nearly 30% for his work to date in Congress and a disapproval rating of 35%.

On how to address disparities in access to health care in Indigenous communities, Ronning said she would call for more funding to improve Indian health services, as well as more training for health professionals on problems specific to rural areas.

Buchanan said during a visit to Fallon County near Baker, there were no full-time medical professionals on staff. He did not specify which facility he visited.

“They use traveling nurses, traveling medical assistants, traveling doctors, and I think the same problem exists on reservations,” he said.

He said medical professionals should be able to repay their student loans through a booking service.

When asked what potential solutions they would have regarding the disproportionate impact of the opioid epidemic on reservations, Ronning said that when talking about addiction, it’s important to also discuss poverty.

“We need to find ways to build collateral, ways to develop banking systems on our reserves. I think those are things that will have a ripple effect in addressing the systemic issues that led to the opioid crisis,” Ronning said.

Buchanan said wherever the drugs come from, the crimes need to be prosecuted more professionally. He said overdoses lead to suicide, and he bragged about participating in suicide marches around the state.

Candidates were asked how they would address the issue of the disproportionate number of missing and murdered Native women in Montana.

Buchanan said he thinks there should be better cooperation between “our own police and sheriff’s departments, and the Bureau of Indian Affairs and the police on the reservation.”

Ronning stood by his experience co-founding the Human Trafficking Task Force in the Yellowstone County area and said better communication between law enforcement and victim services was key.

“One of the most important things we’ve learned through our working group is that we also need to have a common language,” she said.

Asked about disparities in how law enforcement treats missing Native people compared to non-Natives, Ronning said Montana was in the top five for missing Native women in the country, citing a 2018 report . report of the Urban Indian Health Institute.

She cited the importance of data collection as well as police follow-ups on documents and reports. She also suggested hiring more Indigenous police officers.

Candidates were asked how they would tackle rising energy costs for Indigenous communities, and both candidates said they were interested in renewable energy.

Buchanan highlighted Calumet Refinery in Great Falls Renewable Diesel Fuel project as well as a new wind farm to be built near Colstrip, after initially calling it a solar farm, to which Ronning corrected him.

“I think there are so many opportunities in Montana to bring in renewable energy,” Ronning said. “That doesn’t mean we’re shutting down coal, oil and gas, and we’re not ready to do that.”

Both candidates said they believed Montana’s election was safe and secure and also supported a National Indigenous Peoples Day instead of Columbus Day.

In Buchanan’s closing statement, he said he would hire a Native American coordinator “to help me figure out what to do.”