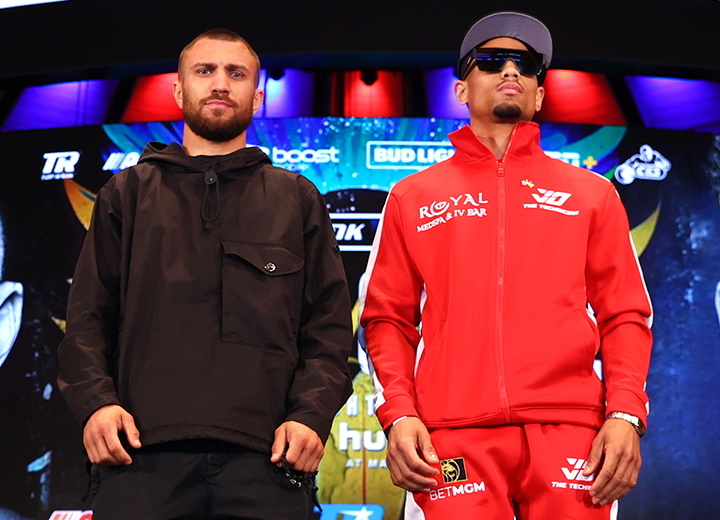 Normally stoic in his approach, Vasiliy Lomachenko flashed a bright smile after tipping the scales at 134.6. In what will be his first in-ring appearance since December 21, the Ukrainian was greeted with exuberant and joyful cheers. However, moments earlier, Jamaine Ortiz, his next nemesis and former sparring partner, stood stone-faced as the boos rained down on him.

Yet despite the teasing, the 26-year-old remained unmoved as he checked in at 134 pounds. After sharing the ring with Lomachenko in countless heated training sessions, Ortiz expressed confidence in his ability to hand the former two-time Olympic gold medalist the third loss of his career.

Outside of his familiarity with his star-studded opponent, Ortiz’s confidence stems from his last in-ring appearance.

In what amounted to a career-best performance, Ortiz jumped to the front of the contenders line after his close but clear unanimous decision victory over former champion Jamel Herring. Although his outstanding performance may have brought him to the brink of a world title opportunity, Lomachenko has plans of his own.

After working diligently in the title hunt following his loss to Teofimo Lopez in 2020, Lomachenko picked up back-to-back wins before giving his Ukraine native a helping hand in the ongoing Russian invasion. Now back in the boxing world, the 34-year-old could find himself in trouble for the undisputed lightweight crown against Devin Haney, should he claim victory on Saturday night.

Below are the weights for the full undercard, which airs live on ESPN+ starting at 6:15 p.m. ET.